🔙 Return to: How Transit Integrates GTFS

The  route_short_name field should contain the briefest designation that is used by riders or in agency publications. If there is no brief name used for a route, use route_long_name only. Note that only one of the two fields is required. 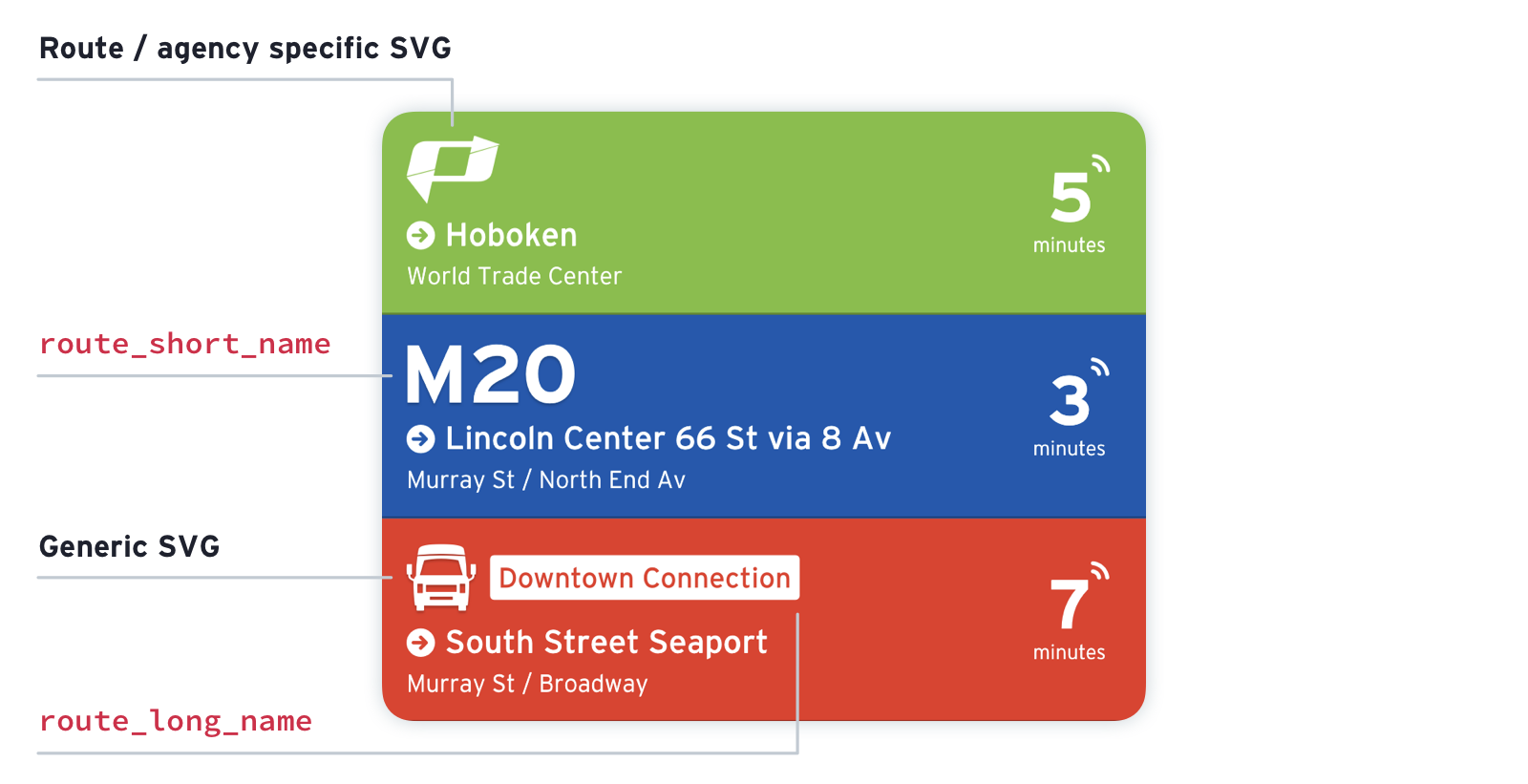 route_short_name is displayed in a large format and in some cases we use SVG images to represent route branding instead or in addition to the  route_short_name or route_long_name.

If there is no brief  route_short_name and route_long_name is more commonly used, Transit can manually alter how longer strings such as "Downtown Connection" in the example above are displayed, such as using boxed text beside an SVG that corresponds to the route's mode or agency.

In most cases, route_long_name is only displayed when searched for in the app, and is not otherwise shown as part of a route's identifying information.

Transit has default display settings based on  route_type. Any route_type other than 3 (bus) will display a vehicle image in place of a route_short_name in nearby and route detail. If a route is operated by a bus, even if it is serving as rail replacement, it should have a  route_type of 3 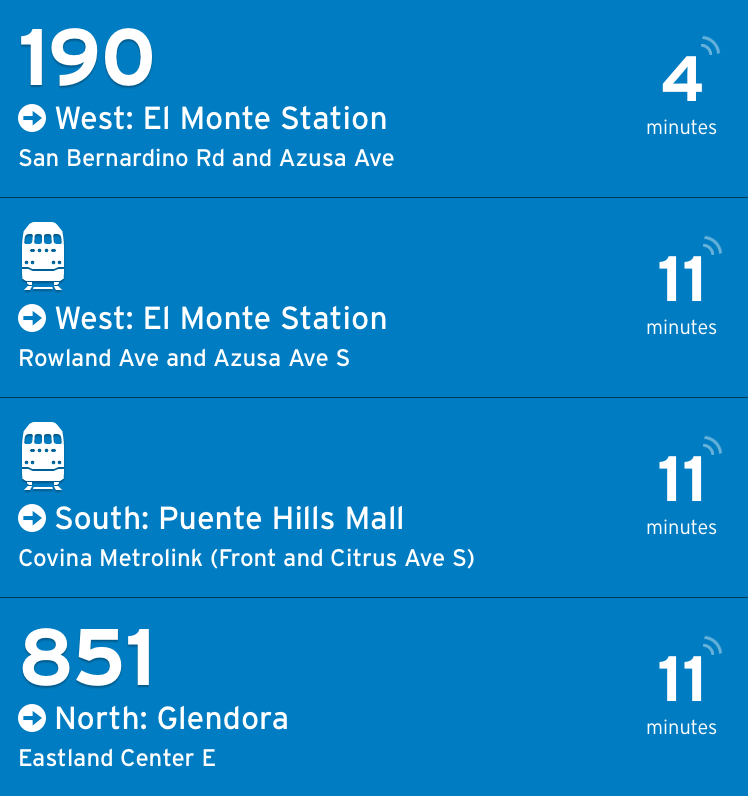 This screenshot shows routes that were accidentally assigned  route_type 2 (commuter rail), so the default image is displayed instead of the route_short_name although these routes are all operated as buses.

Please avoid primary HTML colours such as #FFFF00, #FF00FF, #00FFFF, #0000FF, #00FF00, and #FF0000. The  route_color and route_text_color fields should have enough contrast to be readable. You can check the contrast of two colours using a WCAG contrast checker to ensure your colours meet visual accessibility standards. The route_color field should reflect agency branding. It should be used primarily to distinguish types of services (e.g. express vs local routes). In metropolitan areas with many transit operators (e.g. Los Angeles), route_color can be used to distinguish agencies and the colour should be unique for the entire agency. If route_color is defined but not route_text_color (or vice-versa) we cannot automatically use the values in the app.

Even if the  route_text_color were black and more readable, the route_color is very bright on screens. In the right image, the colours have been adjusted away from the primary HTML colours. 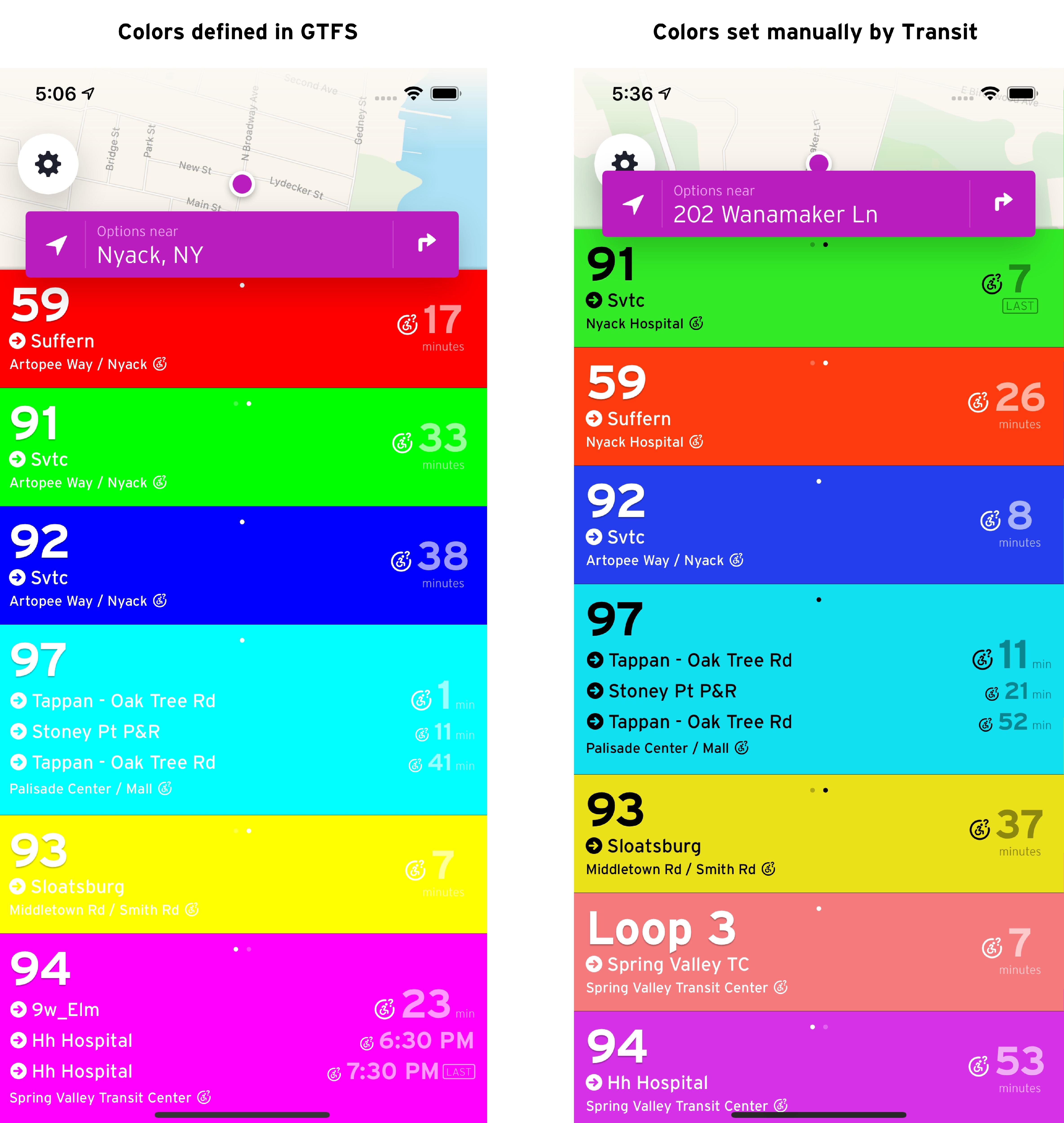